Well I’m not going to lie to you. I had my concerns being assigned to two “rookie” parents, but my agent assured me I was in good hands. After all Mom came from a family of 11 kids, 9 of whom were younger than her and Dad had ten younger nieces and nephews so while they had never played on the professional stage before they had plenty of good experience in the amateur ranks. And if things got too bad there were plenty of veteran grandparents and aunts who could step in on an “as needed” basis.

Well things started out pretty good and I was pretty happy with my situation. Mom and Dad were doing a great job and I really noticed the great chemistry they had when working as a team for my feedings/diaper changes/etc. Even though Dad had threatened to hold out on his diaper changing responsibilities he was usually the first person on the scene and was glad to work with mom to give me a hand when nature came a calling.

In fact he was doing so good that she felt comfortable stepping out to the bathroom for a few minutes as Dad was bringing me up to the changing table. I could see the determination in Dad’s eye and could tell he wasn’t going to wait for Mom on this one.

Well as you learned earlier in my delivery synopsis I came out of the gates firing on all cylinders and made sure that all the plumming was in tact and functioning properly. Well I heard the nurses telling my parents that they were concerned that it had been over 24 hours and hadn’t “watered the bushes” since I came out. Little did they know I was just waiting for an opportune time to test my parent’s true skill level and to make sure I had a good sense of what I was getting into before I let the Doctor sign the discharge notice.

Well I didn’t really buy the “nephews and nieces” story as I was pretty sure Dad probably didn’t change too many diapers in his backup role as Uncle. So as soon as he opened my diaper I decided to give him a little surprise and see how he handled the situation. Dad quickly noticed my surprise and quickly pushed my diaper down averting any potential disaster. I let the geyser flow and did a pretty good job of completely soaking this wimpy newborn diaper. I was pretty satisfied with Dad’s performance and was thinking I was in pretty good hands afterall. Then as Dad was making the final preparations, I noticed that he made a critical mistake and completely took his eye off my “water spout”. So I decided to see how fast Dad could react to surprise encore performance.

Well I don’t want to be too rough on the guy, but lets just put it this way. Mom came running out of the bathroom because she heard this little baby screaming at the top of his lungs only to find out the noise was coming from Dad. Somehow in the chaos Dad thought that lifting my rear end up in the air was going to somehow remedy the problem. Well, instead of just having a little pee running down my stomach I ended up with it on my head, face, chest, shirt, hat, all my blankets, the entire bassinet, and a good portion of the floor.

As most of you probably know. Mom and dad took a couple trips to the hospital over the month of May to “have the baby”. I decided to stay put until last Wednesday. Dad dropped mom off at Grandma Kate’s house in the morning and headed off to work.

Mom assured Grandma that she was fine and that her contractions would just go away and there was no need to go into the hospital again only to be sent home AGAIN. Around 10:00 Grandma took charge and brought mom and me into the hospital where dad was already waiting with my first basketball.

As usual after a couple hours in the hospital mom’s contractions started to fade off. Dr. Savage came in at 1:30 pm and broke mom’s water. Mom and Dad then began to walk the hallways. Dad noticed two little twin girls waiting to see their new little twin brothers and made a comment to mom telling her she should have some twins for him. I think Dad still has a mark on his arm where Mom hit him.

After about 15 minutes of walking the hall we were back in the room and from this point on Mom stopped talking to Dad. For some reason Dad couldn’t understand why Mom didn’t think watching a mother elephant give birth on the discovery channel would help her through this moment in her life.

After about an hour of silence and the mother elephant giving birth to a healthy baby, the nurses came in to check Mom at 3pm. After all the hassle mom had been through earlier in her pregnancy she was just hoping that the nurse was going to tell her that she didn’t needed go home. The nurse however told her that she could start pushing on the next contraction.

Mom didn’t believe her and said “Are you joking?” The nurse assured her that she wouldn’t be alive if she told jokes like that to laboring women. Soon after Mom’s bed was approximately 6ft in the air and Dr. Savage and his nurses began to put on their combat gear. I think I have seen U.S. soldiers in Iraq with less protective equipment on and I think Dad was getting nervous that he didn’t have some kind of helmet or shield with which to protect himself.

The nurses ask Mom and Dad if they know what they are having. Mom tells them its a surprise, but that “dad knows that it is a boy, because he only makes boys.”

Mom began pushing and I started making my way down through the birth canal. While in the birth canal my heart rate dropped way down. Gee I wonder why…..you try squeezing your entire body through the hole in your toilet and let me know how your heart rate is doing. Now this is where all the years of medical school paid off for Dr. Savage. Here I am in probably one of the most uncomfortable and painful positions of my life and what does he do? He reaches his hand in there and gives me a darn noogy on the top of my head!!! Well of course my heart rate shot up, now instead of just trying to deal with my situation I’m ready to get out there and kick this guy’s butt.

Well about 10 noogies later I get my head out and my right hand is pressed up against the side of my face and I begin to wave to everyone in the room. About 2 seconds later my arm finally gets free and I reach up and grab the Doctors finger and won’t let go. I’m going to give this guy a piece my mind and assure him that if he gives me one more noogy I’m going to have to kick his butt.

Well the rest of me slides out and the doctor lets everyone know that Dad was indeed right. I also figured that now was as good as time as any to make sure the plumbing was working and if Dr. Savage hadn’t been wearing his fully army fatigues I might have been able to get him back for all those noogies.

Sorry I didn’t start writing to you all sooner, but they wouldn’t let me out of the hospital for the first 48 hours after my birth and well dad wouldn’t let me use the computer until after he was certain I knew all the species of fish he has in his fish tank first.

Well I suppose I will start out by telling you all a little bit about myself. My name is Jack Roger Coenen and I came into this world on 5-25-05 at exactly 4:00PM CST. I weighed 7lbs 8.5 oz and was 21 inches long. Long and skinny, gee wonder where I got that from.

Speaking of my parents I’ll give you a little info about them so you know who I am making fun of in the rest of my posts. My mother is Betsy Coenen (Fannin) and my dad is Jeremy Coenen. I am the first of many Coenen children (at least that’s what dad told me) and am also the first of many many grandchildren for my grandparents Kate and Rob Fannin and also the first “Coenen” grandchild for my other grandparents Roger and Gloria Coenen.

I’ll maybe draw up a family tree to throw up on Coenens.com once dad installs Visio for me and once he upgrades the monitor to a 50″ Plasma screen so that I can fit mom’s immediate family on the screen.

This blog’s purpose will be to make sure that everyone who reads it knows who Jack is, that way the next time someone tells you that “You don’t know Jack” you can respond yes I do he’s that cute little Coenen kid who pokes fun of his parent’s at TheCoenens.com 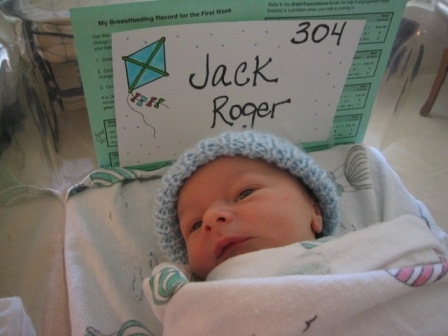